Malachi is the son of Cassie Hughes and Azazeal. After his quick growth during the first episodes of Series Two, he enrolls to Medanham Hall in order to seduce its student body.

Meet Malachi, he is technically supposed to be just a baby still but being Cassie and Azazeal's son, a witch and a fallen angel, he is half witch and half fallen angel so he grows fast. He's 17 forever, even when he is older, just like Ella Dee. He used to be between good and evil but not anymore, now he is completely evil but there is a chance to make him good again. If someone knows how to. He loves both parents and wants them together, as does his dad, because they both want to be a family. Malachi was with Ella briefly but he is single at the moment. So go a head and plot with him too. He is sneaky and wild guy, there is no much boring moments around him.

Azazeal possesses Cassie, and while under his power, she gives herself to him and they conceive a child. Thelma learns from Peggy, the ghost of a woman who died in the 1918 influenza pandemic, that the gestation of Azazeal's child is weakening the veil between worlds, allowing more ghosts to appear to the living. If the child is born, the veil will be torn, allowing the rest of the Nephilim to enter our world. If the pregnancy is terminated, the veil will heal, preventing the Nephilim from returning and leaving Azazeal the only one of his kind in our world. But there is a side effect: ghosts will also vanish from this world.Cassie, after much convincing from Thelma decides that her fetus must be aborted, although it is growing at an alarming rate. A week after conception, the doctors believe she is nearing the end of her second trimester. Thelma assists Cassie, without telling her that success means that she may never see Cassie again. Azazeal tries to interfere and save his son, but Cassie goes through with the abortion...or so she thinks. When Thelma realizes that Cassie can still see her, Thelma knows that something has not gone right. Cassie discovers weeks later that the doctor who performed her procedure has been influenced by Azazeal, and that the baby is alive and in Azazeal's care.

Thelma discovers that Azazeal is raising the child, who is walking already, in an abandoned nearby church. She and Cassie decide that they must somehow get the child, whom Azazeal has named "Malachi", but are clueless as to how to accomplish this. Azazeal becomes aware that they are watching him and tries to convince Cassie that he only wants her to join them so that they can be a "real family". Cassie, still partially under his spell, is obviously attracted by the prospect but retains enough of herself to know that this is something she should not want.It is quickly revealed that Ella is definitely not what she seems. She is 445 years old and the daughter of John Dee. Ella is also a witch and has been hunting Azazeal for centuries. So far, she has been very successful in preventing Azazeal from begetting a son by a mortal witch. This time, however, Ella was too late. Her mission: kill Malachi. Ella instantly takes charge of both Cassie and Thelma, and formulates a plan to kidnap Malachi and sacrifice him in the school chapel. They are successful in grabbing the child, but Azazeal follows them and a series of alternately foolish and selfish decisions leads the girls inexorably to tragedy. With Azazeal present, Cassie loses her resolve and throws her body between Ella and Malachi. She dies instantly when Ella can't stop her killing blow, and Azazeal regains Malachi and retreats. Is tortured by Azazeal and the now teenaged Malachi, who kills him out of pity. Azazeal is asked to leave by "higher powers" and enlists Malachi at Medenham Hall. He and Ella say their goodbyes; with Malachi born, Ella has no desire to kill him, and Azazeal leaves the Stone of Belial in Malachi's possession. Ella kills Jez and makes it look like suicide, precipitated by the revelation that he was having an affair with a student, which deeply affects Roxanne, who felt responsible because she had seduced him. Ella and Malachi romance one another magically and otherwise, and their respective mentors, the Archangel Raphael and the demon Mephistopheles, both use psychological tactics to get them to do as they wish. Ella and Malachi eventually have sex, as the evil side had wanted, and by fulfilling Ella's true desire (to be normal), she is made a slave to Malachi – his succubus. Malachi kills a lesbian girl named Maya so that her ghost can consort with Thelma and give him leverage. Ella's enslavement to Malachi is ended by Thelma, who invaded her dreams and invoked her greatest fear: fire. Leon attempts to kill Malachi, but is betrayed by Thelma (in hopes of keeping her and Maya together in the living world) and saved by Ella after Malachi sends a fallen Archangel, Sariel, to attack him. Mephistopheles betrays the cause of evil by helping Ella save Leon, who he feels did not need to die, and is subsequently punished and has his eyes removed. Raphael falls from grace by trying to rape Ella, who announces at this point that she no longer works for Raphael's master, God, and is a freelance agent at last. Ella loses all her feelings for Malachi, who quickly moves on to romancing Alex and other girls in the school. He eventually seduces the entire student body, creating an army of succubi and incubi that makes him too powerful for Ella to kill. The only students who are not converted are Roxanne (who becomes a "pure soul" in her quest for forgiveness from God for seducing Jez and causing his apparent suicide), Tom (who is secretly gay, in love with Leon, and impossible to convert because Malachi cannot make Leon love him back), Thelma (because after Ella later kills Maya, he has no hold over her), and Ella herself, who had already been freed from Malachi's spell. Ella digs up Maya's corpse and beheads it, which destroys Maya's lingering presence on Earth. Leon tries to kill Alex but cannot go through with it, leaving him feeling inferior to Ella. Jo Watkins, Cassie's former teacher and Azazeal's former lover, returns as Malachi's new emissary from the "higher powers" and restores her position as headmistress by framing David Tyrel for embezzlement of school funds. Malachi cannot convert Tom, so he fakes the "mark of Malachi" on his neck and ensures that Leon will see it. Fooled by the false mark, Leon kills Tom, but by doing so, he achieves his greatest desire (not being inferior to Ella) and becomes an incubus of Malachi's. Leon almost kills Ella with knowledge gained from the Book of Orokiah, but Thelma helps to save her. He is locked in a cage and sedated, at which point Thelma saves him from Malachi by invoking his greatest fear (having his penis amputated). Returned to normal, he still ends his relationship with Ella and leaves the school. Roxanne is given the ability to see ghosts, and Thelma pretends to be an angel to get her to steal the Stone of Belial back from Malachi. Ella uses the Stone to travel back in time and attempts to kill Malachi while he is still a baby (at the end of Series 1), but she is attacked by Perie the Faerie and receives a mortal wound to the chest. Ella returns to Medenham Hall where she confesses her love for Leon as she lies dying under the watchful eyes of Thelma. Rejected by Hell, Mephistopheles convinces Leon to return, where he saves Ella by cauterizing her wound. Malachi sacrifices the pure-of-heart Roxanne to "enrage God" by killing one of "His creatures." The school is set ablaze and Thelma, Ella, and Leon escape from it to a field somewhere. As Malachi has started the "End of Days," described by Mephistopheles as the final battle between good and evil, the series ends with blood pouring from a rock bearing the mark of Azazeal, similar to Malachi's.

Azazeal seduced a series of women throughout the ages, dating from ancient Egypt to the present,through a series of demonic possessions, he conceives an heir,but these women were usually killed by Ella Dee because order to stop the freedom of the Nephilim that his son's birth would signal. In the first episode of Hex,Azazeal was stalked Cassie(the decendent the first lady of Mendenham Rachel McBain)Cassie was Azazeal's selection to be the mother of his child so he could free all 200 of the Nephilim army. After Cassie having her under his control and conceiving a child with her,with Cassie, and convinces the abortionist to put the child in his care at Christmas time.After loses her resolve and throws her body between Ella and Malachi,Azazeal regains Malachi and retreats.

When Malachi is older,he and Azazeal have a normal relationship as father and son and even like as a friend with a friend,in some parts of the series he showed similarities as his father.Malachi was one of the people who is Azazeal truly loved and to whom he cares,this is demonstrated from the beginning of Malachi's conception up to Azazeal is suddenly notified by higher powers that he is no longer to be Malachi's caregiver, replaced with Mephistopheles. Malachi loves both parents and wants them together, as does his dad, because they both want to be a family. 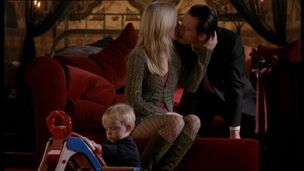 In the first episode of Hex, Azazeal stalked Cassie(the decendent the first lady of Mendenham Rachel McBain).  Cassie was Azazeal's selection to be the mother of his child so he could free all 200 of the Nephilim army. After Azazeal having her under his control and conceiving a child with her, and convinces the abortionist through moral manipulation during a meeting at a church to put the child in his care at Christmas time.

Malachi shows an attraction towards Ella after she begins dating Leon.  Both parties are warned off each other by their respective "angels" as it would have horrible consequences and stray them from their destinies.  The two ignored this and indulged in playful flirting, and Malachi almost seduced Ella on a trip/date back into the past but she spotted Leon (who she was still dating) and ran off.  Following this Leon dumps Ella and she feels free to engage with Malachi, but the "consequences" soon pop up and render Malachi blind and Ella covered in boils.  The two say they want to reject their destinies and decide to do the opposite and sleep together.  This in fact traps Ella's soul and causes her to act like a domestic house wife to Malachi to which he finds boring and abuses; ranging making her carry his books to offering her as a sex slave.  Once this "spell" is broken Ella vows she has no problem in finishing her destiny and the two break up.

Retrieved from "https://hex-tv.fandom.com/wiki/Malachi?oldid=5470"
Community content is available under CC-BY-SA unless otherwise noted.